Sophy Boyle first became fascinated with the medieval era, and the Wars of the Roses in particular, when still at school, and her interest grew while studying History at Oxford.

She enjoyed a career as a City lawyer until, in 2013, she decided to step back to devote her time to what would become Wyvern and Star, the first book in a planned series of seven Wars of the Roses novels.

Sophy lives in London. Wyvern and Star was her debut novel, and she has now published  the second instalment in the Wyvern and Star series of historical novels, Jewels Beyond Price. 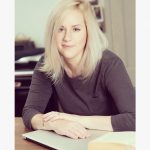